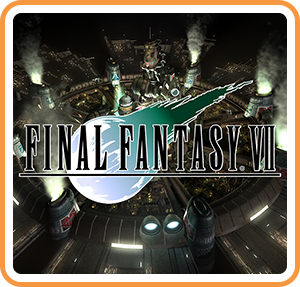 FINAL FANTASY VII, the timeless classic loved by a legion of fans, comes to Nintendo Switch with a number of helpful extra features!

The world has fallen under the dominion of the Shinra Electric Power Company, a sinister corporation that has monopolized the planet's very life force as Mako energy.
In the urban megalopolis of Midgar, an anti-Shinra rebel group calling themselves Avalanche have stepped up their campaign of resistance.
Cloud Strife, a former member of Shinra's elite SOLDIER unit now turned mercenary, lends his aid to the rebels, unaware that he will be drawn into an epic battle for the fate of the planet, while having to come to terms with his own lost past.

This game is a port of the original FINAL FANTASY VII.
The following extra features are included;
◆ 3x speed mode
◆ Ability to turn battle encounters off
◆ Battle enhancement mode

Maximinium
Jackpack
Mickey
Incredible that a game with super dated graphics can be among everyone's favorite Final Fantasy game. Trust the hype, it's amazing!
Show MoreShow Less
weegee90000
RenyaKara
Absolute classic. Plays well, with just some occasional frame drops.
Show MoreShow Less
aiboi7
El_DaaS
Luis8ustamante
Chrono
***Disclaimer***
This review is scaled for retro/HD remaster port. Meaning rating graphics 5 star doesn't mean a photorealistic graphics. It is translated to the graphical prowness of the era it was produced with enhanced ports compared to other similarly released games of it's era.

The best of the series for some. The highest selling game of the series since it's released and the game that introduced/popularized RPG to the west. This is final fantasy 7.

The story of the game is the first departure in the series fantasy setting. Although the meaning of "fantasy" is debatable. The game opted for an industrial theme rather the more medieval fantasy theme the series was known for. The story revolves around a soldier turned mercenary going up against a juggernaut corporation. Coupled with a world ending subplot around ancients, Livestream and a meteor. The last bit sounds cheesy but that's because the game is to its core very cheesy. Whether to its character or scenario.

Playing through the game at first is very engaging. The first section the "midgar part" is very thrilling and high paced. It is also jammed pack with exposition the leaves you wanting more. After reaching the open world section of the story however exposes the games short comings. The overly cheesy dialogues and scenarios, gimmicky mini games, jarring lack of character development of some of it's characters including the protagonist who despite overcoming his mistaken identity generally remains the same throughout the story; and the missable characters and events that when missed leaves the game bare bones.

While the combat is your typical standard turn-based RPG with materia substituting as magic and stat boosters. It's good enough until the end of the story. Overall the game is good. Overated? Very. Deserves the attention it has garnered? Yes.
Show MoreShow Less
Moogy
Probably the best game of all time, decent port
Show MoreShow Less
Jimman