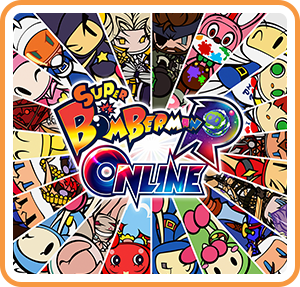 Drop bombs and collect power-ups to blast your way through SUPER BOMBERMAN R ONLINE! You can compete against up to 64 players from around the world in this explosive survival battle!

You can compete against up to 64 players from around the world in this explosive survival battle! Fight your way to the end and outlast all other players to be BOMBER ONE!

CUSTOMIZABLE CHAOS
Self-explode in style with fresh outfits and bomb skins bursting with pop-corn, or try on the latest head accessories available to customize your look!

PICK YOUR POWER-UPS
From essential Punching Gloves to the return of the iconic Louies, pick your power-ups fast to your kick your friends out with a spark!

AwildMew2
A Bomberman battle royale that takes a little time to get adjusted to.
Show MoreShow Less
VoluXian
Bomberman Battle Royale. 64 players in 16 maps adjacent to one another. It's intense, competitive, and of course - explosive. Alongside the main BR mode (Battle 64), there's private lobbies a person with the paid version of the game can create: there you can play OG Bomber Battles, Grand Prix Battles, and Battle 64 - with enough players. Compared to Super Bomberman R, it's inferior graphically. Playing free you'll start with all the default Bombermen and a few new characters.

To get access to the rest of the characters, you'll have to... you guessed it: buy the Premium Pack, which is 9.99USD. Then there's a Gold Seasonal Bomber Pass and shop items that require you to use the currency to purchase, and you won't get that much of the currency from just playing the game, so if you really like the game like me, then go for it. At least the microtransactions aren't as agressive as most EA and 2K games imo.

But yeah, the game itself is really fun to me. Even if you're constantly dying early on, you just want to get right back in and try again and again and again and-- next thing you know you forgot to eat anything. T'is the cycle of a fun Multiplayer Game.
Show MoreShow Less